“He began to gasp and choke, breathless from his shrill continuous screams.” 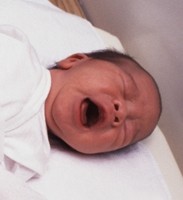 To help in determining the degree of pain and stress caused by circumcision, infant response was compared to that resulting from other procedures. Levels of cortisol (a hormone released into the blood in response to stress) and behavioral responses were recorded for newborns undergoing circumcision, heel-stick blood sampling, weighing and measuring, and discharge examination. Circumcision resulted in significantly higher levels of behavioral distress and blood cortisol levels than did the other procedures. Since the infant is restrained during circumcision, the response to the use of restraint was similarly tested and was not found to be measurably distressing to newborns.(1)

Circumcision is a surgical procedure that involves forcefully separating the foreskin from the glans and then cutting it off. It is typically accomplished with a special clamp device (see Fig. 2). Over a dozen studies confirm the extreme pain of circumcision. It has been described as “among the most painful [procedures] performed in neonatal medicine.”(2) In one study, researchers concluded that the pain was “severe and persistent.”(3) Increases in heart rate of 55 beats per minute have been recorded, about a 50 percent increase over the baseline.(4) After circumcision, the level of blood cortisol increased by a factor of three to four times the level prior to circumcision.(5) Investigators reported, “This level of pain would not be tolerated by older patients.”(6)

Circumcision pain is described in this research study by Howard Stang and his colleagues from the Department of Pediatrics, Group Health Inc., and the University of Minnesota Institute of Child Development: “There is no doubt that circumcisions are painful for the baby. Indeed, circumcision has become a model for the analysis of pain and stress responses in the newborn.” They report that the infant will “cry vigorously, tremble, and in some cases become mildly cyanotic [having blueness or lividness of the skin, caused by a deficiency of oxygen] because of prolonged crying.”(7)

According to adult listeners in one study, the infant’s response during circumcision included a cry that changed with the level of pain being experienced. The most invasive part of the procedure caused the longest crying. These cries were high pitched and were judged most urgent.(8) A subsequent study confirmed that cries with higher pitch were perceived to be more distressing and urgent.(9) Excessive crying can itself cause harm. In a rare case, an infant cried vehemently for about ninety minutes and ruptured his stomach.(10) Using a pacifier during circumcision reduced crying but did not affect hormonal pain response.(11) Therefore, while crying may be absent, other body signals demonstrate that pain is always present during circumcision.

Another perspective on the infant’s response to circumcision pain is provided by Marilyn Milos, who witnessed a circumcision during her training in nursing school:

We students filed into the newborn nursery to find a baby strapped spread-eagle to a plastic board on a counter top across the room. He was struggling against his restraints—tugging, whimpering, and then crying helplessly. . . . I stroked his little head and spoke softly to him. He began to relax and was momentarily quiet. The silence was soon broken by a piercing scream—the baby’s reaction to having his foreskin pinched and crushed as the doctor attached the clamp to his penis. The shriek intensified when the doctor inserted an instrument between the foreskin and the glans (head of the penis), tearing the two structures apart. The baby started shaking his head back and forth—the only part of his body free to move—as the doctor used another clamp to crush the foreskin lengthwise, which he then cut. This made the opening of the foreskin large enough to insert a circumcision instrument, the device used to protect the glans from being severed during the surgery. The baby began to gasp and choke, breathless from his shrill continuous screams. . . . During the next stage of the surgery, the doctor crushed the foreskin against the circumcision instrument and then, finally, amputated it. The baby was limp, exhausted, spent.(12)

There is disagreement among physicians about using anesthesia during circumcisions. Prior to the mid-1980s, anesthesia was not used because infant pain was denied by the medical community. That belief has changed among many physicians, but an anesthetic still is not always administered due to a lack of familiarity with its use, as well as the belief that it introduces additional risk.(13) Although there is indication that the risk is minimal, some physicians who perform circumcisions do not use anesthetics even after they are taught how. When an anesthetic is used, it relieves only some but not all of the pain, and its effect wanes before the post-operative pain does.(14) The most effective form of anesthetic involves injections into the penis.

Continuing research in this area tends to compare existing options rather than trying new techniques, suggesting that accepting some pain during circumcision is unavoidable. Meanwhile, some physicians’ views about the use of anesthesia during circumcision grow more intense. In a medical article on the subject, the writers described circumcision without pain relief as “barbaric.”(15) Another physician wrote that subjecting an adult to the same practice would be “unfathomable.”(16)

Various studies investigated the effect of circumcision on infant behavior. Some studies found differences in sleep patterns and more irritability among circumcised infants.(17) In addition, changes in infant-maternal interaction were observed during the first twenty-four hours after circumcision.(18) For example, breast- and bottle-fed infants’ feeding behavior has been shown to deteriorate after circumcision.(19) Other behavior differences have been noted on the day following the procedure.(20) The American Academy of Pediatrics (AAP) Task Force on Circumcision noted these various behavioral changes resulting from circumcision in their report.(21)

Researchers found that European reports of newborn infant responses to hearing and taste stimulation showed little difference in responses between males and females, while related tests on American infants showed significant gender differences.(22) Investigators suggested that these differences could be the result of circumcision and not gender.

In one of the most important studies, the behavior of nearly 90 percent of circumcised infants significantly changed after the circumcision.(23) Some became more active, and some became less active. The quality of the change generally was associated with whether they were crying or quiet respectively at the start of the circumcision. This suggests the use of different coping styles by infants when they are subjected to extreme pain. In addition, the researchers observed that circumcised infants had lessened ability to comfort themselves or to be comforted by others.

Some mothers and nurses who contacted the Circumcision Resource Center also noted behavior changes. Sally Hughes, an obstetrical nurse who has seen many circumcised infants before they go home, reported,

The persistence of specific behavioral changes after circumcision in neonates implies the presence of memory. In the short term, these behavioral changes may disrupt the adaptation of newborn infants to their postnatal environment, the development of parent-infant bonding, and feeding schedules.(25)

A team of Canadian researchers produced evidence that circumcision has long-lasting traumatic effects. An article published in the international medical journal The Lancet reported the effect of infant circumcision on pain response during subsequent routine vaccination. The researchers tested 87 infants at 4 months or 6 months of age. The boys who had been circumcised were more sensitive to pain than the uncircumcised boys. Differences between groups were significant regarding facial action, crying time, and assessments of pain.

The authors believe that “neonatal circumcision may induce long-lasting changes in infant pain behavior because of alterations in the infant’s central neural processing of painful stimuli.” They also write that “the long-term consequences of surgery done without anaesthesia are likely to include post-traumatic stress as well as pain. It is therefore possible that the greater vaccination response in the infants circumcised without anaesthesia may represent an infant analogue of a post-traumatic stress disorder triggered by a traumatic and painful event and re-experienced under similar circumstances of pain during vaccination.”(26)